Wow, hard to believe, isn't it? Tomorrow we'll be in a new year. This was a great year for me, most memorably because I became a momma for the first time. Speaking of that special guy, he turned 8 months old on Sunday! Hard to believe this little guy is 8 months old already! Two bottom teeth, pulling mom's hair, loves to try new foods, army crawling and flirting! Lots of new noises, too, including what sounds to us like, "hi" "da da" & "ba bye". I'm looking forward to the new year, though! As far as resolutions go... Of course I would like to eat healthier, exercise more, read more books, do a better job at keeping in touch with friends, but I'm not going to put a lot of pressure on myself for any of those things. Just going to try to stay in the moment and be the best mom, wife, teacher, etc. that I can be. Another thing that's coming to a close today is my 366 day photo-a-day challenge. I've posted them all on Flickr throughout the year. I did miss a day here and there, but I think that I did pretty well. I don't think that I necessarily became a better photographer, but I do think I documented our everyday life and became more aware of those moments that were photo opportunities. Decided it would be appropriate to end with a self-portrait (and my new darker hair).
Posted by Unknown at 5:41 PM No comments: 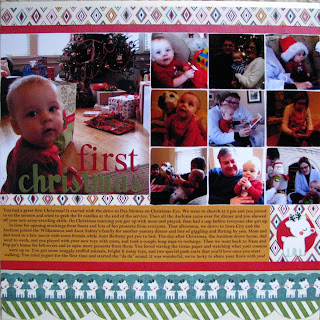 Lachlan's first Christmas was a great one! Lots of time with family in Des Moines and Iowa City, and so many thoughtful and fun gifts. I haven't scrapped a 12x12 page in what feels like months so I wanted to make sure I got this one done right away before I forgot everything that happened. Hope you & yours had a wonderful Christmas, too!
Posted by Unknown at 9:35 AM 1 comment: This morning L decided that his spoon was much more interesting than breakfast. I think he's ready to start feeding himself a bit! (and I am so glad that I painted that one wall red, it makes for nice high chair photos!)
Posted by Unknown at 11:06 AM 1 comment: The days fly by even faster during these holiday weeks, don't they? I've been busy working on finishing up shopping and making Christmas gifts (hmm, still getting ready to *start* making a few?), baking, and hanging out with mom and Bethany while they were here for a visit. Auntie Bethany was working on getting Lachlan to crawl while she was home (to her cell phone of course, such a modern baby). He's not up on all fours, but he is army crawling pretty well - here's a video.

Been kinda keeping up with my December Daily book, and trying to remember that I can just have a photo from the day + a few words, even if what we did wasn't especially festive or exciting. Hope you are all enjoying the season and keeping warm this weekend!
Posted by Unknown at 8:19 AM 1 comment: I think baking (and tasting) is one of the best things about Christmastime. I volunteered myself to bring dessert to my inlaws' holiday party tonight, it was a good excuse to try some new recipes. I made Elise's yummy peppermint cookies and I tried some of the Real Simple "bake ahead" cookies. That means that I made the dough/batter earlier this week and froze it until this morning when I had time to bake them all. Very easy and helpful. Here are the yummy links for you -

Peppermint cookies (be careful though, I burned my finger on some molten-hot melted peppermint!)
Lemon Glazed cookies
Ginger Chocolate Chip bars
Pecan Snowballs
I haven't tried these yet, but I hope to sometime soon - Raspberry Pinwheels And of course, Lachlan was his charming self, hanging out in the high chair and chatting with me while I baked (ok, he did do a little napping, too). Have a good weekend! 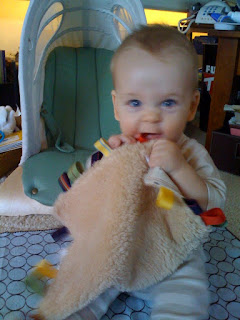 Here's the tag blanket in action. They're about 12" square and have
cute fabric on one side and fuzzy soft stuff on the other. Hard to get
an action shot that's not blurry. :)
Posted by Unknown at 2:45 PM 2 comments: Always a nice surprise to have a few extra free hours that you didn't know were coming. I am SO glad that we don't have to leave the house for any reason today, it looks yucky out there! I'm enjoying the snow day by working on Christmas cards, making this soup in the crockpot, videochatting with grandma, and hanging out with the sweetiepie pictured above (he's already into his Christmas presents, little stinker!). Oh, and listening to some new favorites, and old favorites. Hopefully making a little progress on a clean house and a couple custom order ribbon blankets, too.
Posted by Unknown at 12:29 PM No comments: So glad that the weekend is here! Not sure if it was the preschoolers being all cooped up with the cold weather, or my lack of sleep for a few nights in a row due to L's teething, but I was definitely ready for some downtime.

I always thought that these tag blankets were a little bit silly - until I noticed that Lachlan looks for the tag on almost every toy and starts playing with it/sucking on it - so I decided to make one for him, and another for a new baby gift. They were so much fun to make that I whipped up a few to take to Home Ec Workshop to sell - so if you need a Christmas gift for a baby check them out, or let me know.

Speaking of Home Ec & Christmas shopping, they are having a Handmade Gift Sale today and tomorrow (10-5 today, noon-5 Sunday). You should check it out! Wendy and I are headed over there this morning, and I can't wait to see what they've put together. I know that lots of other shops down in that neighborhood are also having holiday events and free gifts, so avoid the mall and find some unique gifts!
Posted by Unknown at 8:58 AM 3 comments: A tooth has arrived and it is so exciting! I guess it just seems like one of those giant milestones, the first tooth. To be honest, you can hardly see the little bit of white poking through his bottom gum, but you can definitely feel it and that explains the general grouchiness and lack of sleeping around here for the past couple days. I added some photos to my December daily album. It is nice to have it all put together and I can just pop in some photos and journaling. I'm looking forward to recording L's first holiday season, since neither of us will remember it very well in a few years. :) I have seen SO many of these coming across in posts from other scrapbookers in my Google Reader - the flickr group has almost 400 members! We'll see how I'm keeping up with it in a couple weeks, but right now it seems pretty managable.
Posted by Unknown at 4:34 PM 1 comment: Not sure how I feel about you arriving, but I did enjoy the sticky snow on our trees Sunday morning! Looked like a winter wonderland, just in time for December to begin - now if we can just avoid the ice!

I think I have craft ADD right now, so many ideas for projects and handmade gifts, but so little time to work on them. I keep bouncing from project to project but not finishing many - yet. Two that are in progress (that I can share) are a December daily mini-album (oh, Ali, always with the inspiring ideas) and a garland for one of our Christmas trees, which is mostly decked out with handmade (and soft, for the nearly mobile baby in the house) ornaments. Good luck with all your holiday preparations!
Posted by Unknown at 5:02 PM 1 comment: